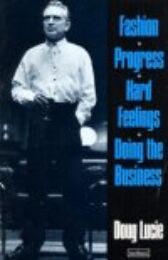 "Doug Lucie is perhaps the only young British dramatist with a truly distinctive voice and in Fashion, it is at its most splendidly scornful, bilious and charmless" ~ Benedict Nightingale, The Times

Doug Lucie is one of Britain's most acerbic playwrights. Described as "thrillingly acute and a serious piece of writing" (Independent), his play Fashion captured the spirit of the Thatcherite age with chilling accuracy

Premiered at the RSC at The Other Place in 1987, it was subsequently revived at The Tricycle Theatre, Kilburn in 1990 and won a Time Out award. Also included are Progress and Hard Feelings, which established Lucie's genius for social comedy and Doing The Business, a bitingly sardonic indictment of business sponsorship for the Arts