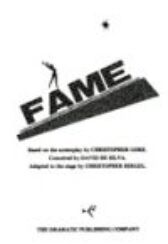 "Right here" is the School of Performing Arts in New York City, and the first problem for the hundreds of young people eager to start paying their dues in pursuit of fame in the performing arts is to get accepted

As the play begins, the school is in the midst of auditioning applicants. They're every size, shape and attitude

They're scared, they're brave, they're rich and they're poor. They've got nothing in common but a compelling dream - and each pursues it in a special way just as each must deal with the special problems of their various lives

Doris, pushed and prodded by her stage mother, has to learn to be beautiful on her own. Montgomery has to come to terms with his loneliness, his considerable talent and his need for a friend

Coco knows it all too quickly. Michael is so handsome and talented it would seem impossible for him to fail. Bruno, living with the music in his head and intolerant of the "moldie oldies" (such as Mozart), frustrates his teacher who hates his attitude but admires his talent

Leroy, an angry young man from the ghetto, is streetwise but a scholastic disaster whose passion for dancing could transform his life - if he'd allow it

Like the School of Performing Arts, this play goes to the essence of young people and of theatre. While this is a play and not a musical, there is some music and some dancing, though this may be adapted to suit the particular talents of your performers