Evil Dead The Musical - USA/CANADA ONLY 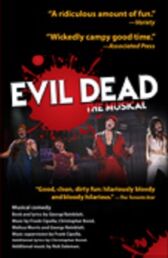 All set to music

The songs in the show are completely off the wall with titles like "All the Men in My Life Keep Getting Killed by Candarian Demons" and "What the F**k Was That?" will have audiences rolling in their seats and screaming for more and more blood

This show has fun with the horror genre and, in doing so, appeals to a wide audience

And with this combination of blood, jokes, cheesy effects and awesome musical numbers, Evil Dead The Musical is unlike any show you've ever seen

The Musical has become a cult sensation of its own

The show played off-Broadway in New York, has broken records in Toronto, has won awards in Korea and has had more than 200 productions mounted across the globe

And because this show appeals to both the fans of the films and the new audience who loves it purely as a stage show, theatres who put on Evil Dead The Musical are amazed by the audience response

Piano and Vocal Scores are available to Rent

"The greatest musical phenomenon on the planet" ~ MTV

"Absurdly brilliant. You won't find a better night out than at this hilarious cult musical" ~ The Examiner.com