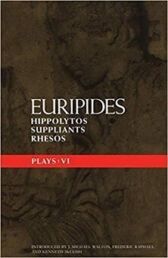 A dramatist whose trademark was the unexpected, Euripides has constantly challenged and intrigued audiences, from Athens of the fifth century BC to the present

The three plays in this volume demonstrate Euripides' versatility ...

Hippolytos - which was turned into Phèdre by Racine - deals with sexual passion, incest and abstinence

In Rhesos all the confusion of sentry duty, the intrigue of spies and intruders, disguises and deceptions are crammed into a single night when the fortunes of war turn against the Trojans by a mixture of devious behaviour and sheer bad luck