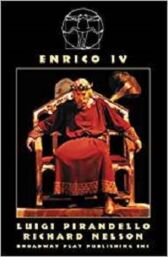 "The time is the early 1920s and the place is an isolated Italian villa, but it might as well be the 12th century

"ENRICO IV is about a man who deliberately chooses to dwell in the rich fantasy life of his madness even after he regains his sanity. Pirandello's finely strung paradox probes the issue of what self-concept qualifies as sane