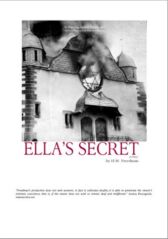 On a quiet Sunday morning in London in 1980, Ella receives an unexpected visit from Helga, a woman she has never met before

Helga has a mission

Ella has a secret

“Where history and story-telling meet, dense narratives arise. Especially when the chapter of history is the Nazi era and when the narratives are the interconnected stories of two women, a German Helga, and a Jewess Ella. It is the perfect occasion for a close confrontation between two diverse points of view about the darkest moment in contemporary European conscience” ~ Manuela Sammarco, teatroteatro.it, Rome

“...the guilt of those who have always known...Those who weren't among the soldiers rounding up the Jews and didn't make the laws...stood by and watched when a Jew was beaten and dragged away and then entered his house and carried off his possessions...Can forgiveness be contemplated for the perpetrators....?” ~ Andrea Pocosgnich, teatroecritica.net, Rome

“...'Ella's Secret' has a profound emotional component...a rivalry that is part of the female universe...intense and satisfying, with the finale of a thriller...” ~ Mauro Corso, Rome

“Freedman's production does not seek answers, in fact it cultivates doubts...it is able to penetrate the viewer's intimate conscience, that is, if the viewer does not wish to remain deaf and indifferent” ~ Andrea Pocosgnich,teatroecritica.net, Rome

What distinguishes Ella’s Secret…is the blurred line it creates between guilt and innocence and how the re-telling of even catastrophic periods of history can be skewed to fit the storyteller’s version of events … unusually for a staged play, the story centres around two older women … An uneasy and abrasive interaction between the two women soon develops into a conversation that tells us how both ‘victim’ and ‘perpetrator’ have made questionable moral decisions…

What Ella’s Secret does effectively is to question morality when applied to real, messy, complex life stories … do Ella’s experiences justify the decision she has taken and the secret she still keeps ~ Maureen Mckarkiel for remotegoat, London