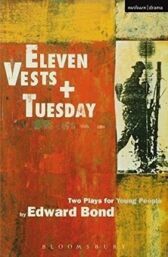 In Eleven Vests one person is involved in two events - one at school, another as a soldier in the army

Although separated by years, the incidents bear an uncanny resemblance to each other

Tuesday - a young girl sits alone in her bedroom studying when her soldier boyfriend returns unexpectedly from active service. In the action that follows she is confronted with a conflict of love and loyalty between him and her father

Edward Bond is " ... one of the two or three major playwrights - and arguably the only one - to emerge since the fifties" - Observer