Electra and Other Plays - Ajax & Women of Trachic & Philoctetes 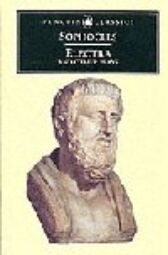 'Now that he is dead,

I turn to you; will you be brave enough

To help me kill the man who killed our father?'

Sophocles' innovative plays transformed Greek myths into dramas featuring complex human characters, through which he explored profound moral issues. Electra portrays the grief of a young woman for her father Agamemnon, who has been killed by her mother's lover. Aeschylus and Euripides also dramatized this story, but the objectivity and humanity of Sophocles' version provides a new perspective

Depicting the fall of a great hero, Ajax examines the enigma of power and weakness combined in one being, while the Women of Trachis portrays the tragic love and error of Heracles' deserted wife Deianeira, and Philoctetes deals with the conflict between physical force and moral strength

E. F. Watling's vivid translation is accompanied by an introduction in which he discusses Sophocles' use of a third actor to create new dramatic situations and compares the different treatments of the Electra myth by the three great tragic poets of classical Athens