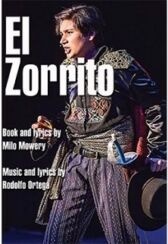 But when he puts on his mask, he becomes El Zorrito, notorious masked bandit and protector of the village

The boy Diego develops a friendship with Ramón's daughter, Christina, who seems sympathetic to the villagers, while his mother, Esperanza, teaches the villagers a machete dance in honor of Cinco de Mayo

Once Zorrito is unmasked by El Berserker, Diego works together with the villagers to defeat El Berserker and overthrow Mayor Ramón on Cinco de Mayo

Music and Lyrics by Rodolfo Ortega

"A rip-roaring, swashbuckling adventure for the young and the young at heart" ~ The Oregonian