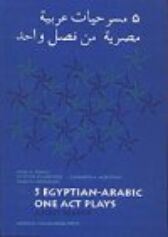 Written in Arabic, this is meant to be a First Reader in Egyptian-Arabic drama for European students

Each of the five short plays has its own peculiarities and dialect, but each is presented in both Arabic script and transcribed into Roman characters with footnotes explaining the passages which cannot be readily looked up in existing dictionaries