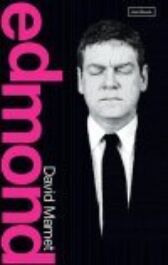 The first single-volume edition of this stunning early Mamet play

You know how much of our life we're alive, you and me? Nothing. Two minutes out of the year. When we meet someone new, when we get married, when, when, when, when we're in difficulties... once in our life at the death of someone that we love. That's... in a carcrash... and that's it. You know, you know, we're sheltered...

A fortune-teller's teasing rumination sends Edmond lurching into New York City's hellish underworld, his whole life abandoned in a searing quest for self-discovery and redemption. A furious, unflinching, whirlwind of a play first produced in 1982

"A stunning amorality play, glittering and disturbing, suspended in the dark void of contemporary New York. It is also a technically adventurous piece pared brilliantly to the bone, highly theatrical in its scenic elisions" ~ Financial Times

"A riveting theatrical experience that illuminates the heart of darkness" ~ Newsweek