Dropped Names - Famous Men and Women As I Knew Them 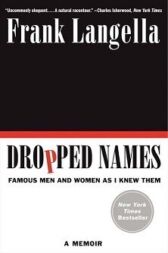 Praised by the New York Times as a “natural raconteur,” legendary actor Frank Langella offers a stunning and unique collection of unforgettable encounters with many of the twentieth century’s most intriguing personalities

Captured forever in a unique memoir, Broadway and film star Frank Langella's myriad encounters with some of the past century's most famous human beings are profoundly affecting, funny, wicked, sometimes shocking, and utterly irresistible

With sharp wit and a perceptive eye, Mr Langella takes us with him into the private worlds and privileged lives of movie stars, presidents, royalty, literary lions, the social elite, and the greats of the Broadway stage

How did Mr Langella terrify a dozing Jackie Onassis?

Why did he streak for Sir Laurence Olivier in an English castle?

What led Elizabeth Taylor to wrap him in her pashmina scarf?

Why did the Queen Mother need Mr Langella's help?

And what did Marilyn Monroe say to him that helped change the course of his life?

Through these shared experiences, we learn something too of Mr Langella's personal journey from the age of fifteen to the present day