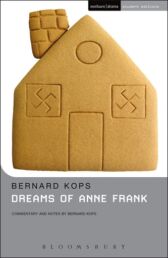 In 1942 Anne Frank, a young Jewish girl, was forced into hiding with seven others in a secret annexe in Amsterdam

Using actors, movement and song Bernard Kops re-imagines and explores Anne Frank's hidden world - a world in which she lived, fell in love and dreamed of freedom

"In celebrating the spirit of optimism that shines through the thoughts and dreams of one extraordinary thirteen-year-old during the darkest of times, Bernard Kops has created a dramatic masterpiece" ~ Time Out

"This play has been a catalyst in stimulating young people not only to question the past but also to confront the very real issues of racism today"~ Jenny Culank, Artistic Director of Classworks Theatre, Cambridge

This STUDENT EDITION includes Commentary and Notes by Bernard Kops