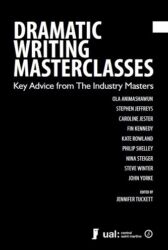 Suitable for writers, students, teachers, the industry and anyone with an interest in dramatic writing, Dramatic Writing Masterclasses offers advice on writing for theatre, film, television, radio and digital media

It offers Key Advice from the Industry Masters, bringing together the experience and insights from professionals who have led the way in dramatic writing training

Stephen Jeffreys, Literary Associate at the Royal Court Theatre for eleven years and creator of Masterclasses which have led the way in Playwriting training in the UK

Caroline Jester, who has been Dramaturg at Birmingham Repertory Theatre and has pioneered collaborative and digital playwriting programmes worldwide

Fin Kennedy, winner of the first Fringe First award ever awarded to a schools production and co-Artistic Director of Tamasha Theatre Company

John Yorke, creator of the BBC Writers Academy and former Head of Channel 4 Drama and Controller of BBC Drama Production

FOR COMPANION VOLUME
The Student Guide to Playwriting, click here