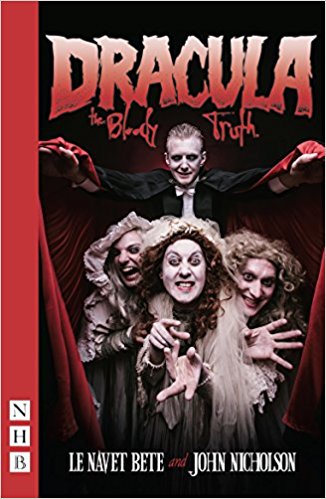 Large Mixed Cast
"Tonight I need you to understand the difference between fiction and the truth. Tonight you will discover that Bram Stoker's Dracula, is in fact ... fact"

Travelling across Europe, from the dark and sinister Transylvanian mountains to the charming seaside town of Whitby, Professor Van Helsing and his three amateur actors stage a life-changing, theatrical production of Dracula

A production they hope will establish The Bloody Truth

This delightfully silly, fast-paced and faithful (-ish) adaptation can be performed by any number of actors - minimum four - playing forty characters

Full of fear and fun, it offers abundant opportunities for any theatre company or drama group to sink their teeth into

"A Gothic madcap mixture of The Play That Goes Wrong, Noises Off, Grand Guignol, Monty Python and slapstick ... " ~ The Reviews Hub