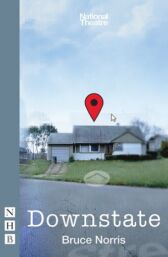 Large Mixed Cast
In downstate Illinois, four men convicted of sex crimes against minors share a group home where they live out their lives in the shadow of the offences they committed

A man shows up to confront his childhood abuser

But does he want closure or retribution?

Downstate received its UK premiere at the National Theatre, London, in March 2019, in the same production which had its world premiere at Steppenwolf Theatre, Chicago, in September 2018

'You can hear a pin-drop for most of the evening except when you are laughing in shock or reeling in surprise ... an astonishing piece of writing, which fulfils art's profound function of making you look and think hard about complex, difficult moral issues' ~ WhatsOnStage

'A haunting vision of sex abuse by a playwright with a gift for unsettling Norris handles the subject matter nimbly an uncomfortable experience, flecked with humour but bleak and haunting. It raises deeply awkward questions about revenge, revulsion and forgiveness' ~ Evening Standard

'A smart, acutely funny, important piece of work Bruce Norris has a lightness of touch which prevents the grim subject matter from a descent into preachiness in an arena where reasoned debate is routinely shouted down, Bruce Norris has proved to be a necessary voice' ~ Telegraph

'An unsentimental act of compassion and a devastating entertainment, a wry polemic and the darkest of dark comedies' ~ Chicago Reader