Down the Line & The Hunt for Red Willie 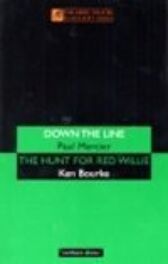 Down the Line ~ Paul Mercier

They have a son who took off to London, a daughter who can't go any further than the front gates without feeling homesick, a younger son orbiting the planet and a younger daughter who is the family's last great hope

A warm and irresistible story of suburban family life by the author of the award-winning Dublin Trilogy, Down the Line premièred on the Peacock Stage of the Abbey Theatre on 28 September 2000

On a remote stretch of bog in County Donegal in 1829, a local landlord meets his end while in pursuit of the notorious Red Willie. Foul play is suspected and the hunt is on. A farcical romp that casts a warm side-long glance at some of the classic plays of Irish theatre, The Hunt for Red Willie premiered on the Peacock Stage of the Abbey Theatre on 23 November 2000.