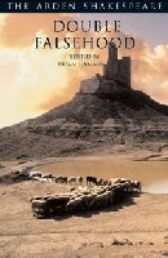 Large Mixed Cast
On December 1727 an intriguing play called Double Falshood or The Distrest Lovers was presented for production at the Theatre Royal, Drury Lane, London

The title page to the 1728 published version claims that the play was 'Written Originally by W.Shakespeare'

Double Falsehood's plot is a version of the story of Cardenio found in Cervantes's Don Quixote (1605), published in 1612 though in circulation earlier

Documentary records testify to the existence of a play, certainly performed in 1613, by John Fletcher and William Shakespeare, probably entitled The History of Cardenio and presumed to have been lost

This intriguing complex textual and performance history is thoroughly explored and debated in this fully annotated edition, including the views of other major Shakespeare scholars

'The play's 'bardic provenance' has been given fresh credibility by publishers Arden, who have included it in a new series of Shakespeare's work. The publication of the play, which is bound to spark heated scholarly discussion, comes after a ten year mission to crack a literary mystery by Professor Brean Hammond, of Nottingham University' ~ Daily Mail