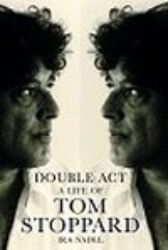 This major study brilliantly recounts Stoppard's life, from his escape as a child from the Nazi occupation of Czechoslovakia via Singapore and India to London where he fetched up in swinging '60s London

Stoppard was the youngest playwright ever produced at the National Theatre, and his career went from there in leaps and bounds to success in the West End and international recognition

Exploring past and present friendships with Kenneth Tynan, Peter O'Toole, Trevor Nunn, Miriam Stoppard, Felicity Kendal and Marie Helvin among many others as well as the human rights work of his more recent years, Double Act is a definitive portrait of the man behind the plays

In addition, Nadel's incisive study shows how Stoppard's life imitates his art and vice versa: the multiple identities of the plays reflect his multi-layered past, the apparent contradictions of his life giving rise to dramatic works that elegantly and irresistibly explore the shifting nature of reality

This is the first major biography of Britain's most successful playwright and it draws on inside sources including Stoppard's own notebooks & letters, some previously unpublished