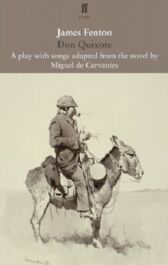 Published by Faber and Faber

This stage adaptation marks the 400th anniversary of Cervantes' death ...

After a lifetime of reading books on chivalry, Don Quixote decides to embark on a quest of his own

Taking up a lance and sword, he sets out to become a wandering knight, defending the helpless and vanquishing the wicked

Hopelessly unprepared and increasingly losing his grip on reality, he travels across Spain accompanied by his faithful and equally ill-suited squire

It premiered at the Swan Theatre, Stratford-upon-Avon, with the Royal Shakespeare Company in March 2016