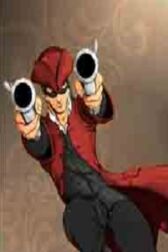 Large Mixed Cast
Two full-length pantos in one volume offering all the traditional elements for large, mixed casts and featuring King Eric the Idle, Mrs Custard-Pigh - and even an optional Count Dracula!

The story of the infamous highwayman and his adventures is brought delightfully to life ...

At first he succeeds - but can Dick's girl Jenny and his few remaining friends unmask the evil Wild in time?

With a cast full of boo-able baddies and a large chorus, Dick Turpin has all the right ingredients to make for a spectacular evening's entertainment

Babes in the Wood

When the King and Queen of Bohemia leave Count Tofifty in charge of the castle when they tour the Kingdom, things don't look too good for the two babes!

The Count has fleeced his estates and now sees the chance for more, so when Robin of Loxley tries to warn the court he's banished from the Kingdom into the woods

In the custody of their dotty Nanny, the Prince and Princess are soon lost in the forest - with a little help from the Count and his henchmen, of course!

Soon, the trio meet the banished Robin and his band of men, and together with a superb combination of romance, swashbuckloing adventure and loads of comedy, the outlaws seek revege to save the Kingdom