Diary of a Burning Woman or The Ghost of Christmas Past 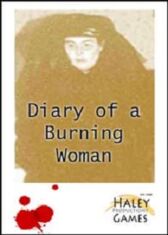 The establishment's owner, Ebenezer Pennypincher, is holding a gala celebration in honor of this momentous occasion

Tim Tinee once owned the establishment but after a tragic fire that allegedly killed one of Tim's employees, Sarah Cratchit - one year ago tonight - Tinee was forced to leave town

He would have rebuilt his tavern were it not for the vicious rumor that he murdered Sarah. With that kind of scandal hanging over his head, he had no choice but to pack up and leave. It was then that Ebenezer took over the property and built The Cooked Goose.

Now it's time to start anew - unless of course the dead woman has something to say about it. And you can wager she will. (NOTE: There are additional murders that occur during the course of the mystery.)

6 PRIMARY SUSPECTS (these are the folks who will have full knowledge of the mystery; you'll give them a complete script):

1. EBENEZER PENNYPINCHER: The new owner of The Cooked Goose Tavern. It doesn't matter how he came to be owner - or does it?

2. AGNES PENNYPINCHER: Ebenezer's long-suffering wife. Where would she be without him (or his wealth)?

3. SARAH CRATCHIT: She was tragically killed in an arson fire one year ago tonight. It's rumored that she now haunts this tavern!

4. LUCY FLAWLUSS: The bar wench; rumored to be very close to her boss, Mr. Pennypincher

5. CHARLIE DICKENS: Ebenezer's "driver". He may be brawny but he's also a bit dim with a bit of an unusual malady

6. TIM TINEE: The former owner of the tavern run out of town due to the rumors that he killed Sarah Cratchit

SECONDARY SUSPECTS (Optional. Use any and all of these secondary suspects if you have "extra" cast members you want to use. You will NOT give them a script but you will give them a description of their character and let them run with it):

1. Druella: A tavern wench who Ebenezer fired so Lucy could have her job. While she and Lucy are not what you'd call the best of friends, Agnes would love to see Druella re-hired so she's her staunchest supporter

2. Watson: A detective helper for Ebenezer

3. Marley: Ebenezer's best friend and partner at the counting house

4. Lord Hiram: A poet and Agnes' male friend to whom she turns in her time of need. She should certainly have him recite some poetry

5. Robert Bleary: The Artic Adventurer (Robert Peary really lived and explored the Artic at that time): Sarah's betrothed. He was off trekking about the Artic when she died

6. Mollie Brown: Loud, crass and not afraid to speak her mind or stand up for herself. An American (Southern) who was raised poor but she married the very wealthy Mr. Brown and now lives the good life - in a larger than life sort of way. She wants to teach Agnes a thing or two about standing up for herself and constantly tries to "teach" her as the situation warrants it. (By the way, the real Mollie Brown survived the sinking of the Titanic.)

7. Walter Klondike: A London Times writer doing a story on Ebenezer. He'd love to find some dirt on the man because he actually sees Ebenezer for the nefarious character that he is

8. Eliza Doolittle: A street urchin who sells flowers and begs for scraps of food. Lucy has a soft spot for her and will convince Ebenezer to let her stay when she's caught pilfering food (or silverware). She keeps trying to steal things all night long

9. Thomas Gibson: A painter who wants to paint Lucy. He keeps trying to "pose" her and constantly expounds on her beauty. This of course makes Ebenezer jealous even though he can't appear jealous

10. Bessie Tinee: Tim's wife. She also likes her liquor and, as she imbibes more and more, suffers through a constant love-hate relationship with her husband and those she feels are responsible for his downfall

Any year (suggest turn of the century) - THE PLACE: England (optional)