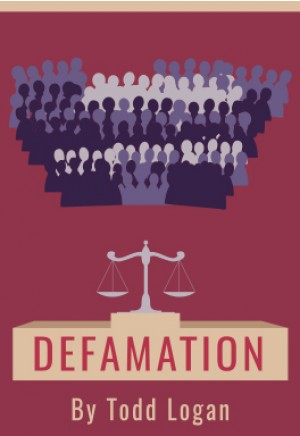 Ms Wade, a professional black female business owner, is invited to the home of Mr Golden, a successful Jewish man, to discuss a potential business project

After the meeting, Mr Golden realizes that his family heirloom watch is gone

And thereby hinges the story of Defamation,

The situation leads to a riveting courtroom encounter that illuminates our common perceptions and prejudices about race, religion and class

Following testimony from each side plus a key witness, the judge tells the audience he's not going to adjudicate the case

The audience will be the jury

He polls them once

The judge then leads the audience in a 15-minute deliberation

He polls the audience a second time

And the result decides the evening's trial

But the case is not a simple "he said, she said"

A case without a smoking gun, Defamation cleverly challenges our preconceived notions about race, class, religion and even the law

As audience members and then jurors, we learn as much or more about ourselves as we learn about the plaintiff and the defendant