Dedicated to the End 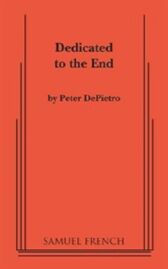 The intended victim is missed, but not for long

His wild, irresponsible son stages his own kidnaping and a madame, turned FBI informant, is killed because she knows too much

When a bitter female reporter uncovers organized crime links in the Governor elect's background, the audience is sure it's on to the killer

But then diary notes and possible love interests surface

Who could it be?

"You're consumed by the mystery. The whole world could have collapsed around us and we'd still be chasing the killer. After the resolution, the performers got a standing ovation" ~ Rochester Democrat and Chronicle