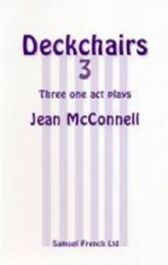 The third volume of short plays set variously on an ocean liner, a seaside esplanade and in a garden contains moving stories of human loving and longing that could be set anywhere in the world

When Janet embarks on her first cruise, she finds herself overwhelmed by the array of delights on offer

However, there is a fellow passenger who is only too willing to be her guide and mentor - the flamboyant Goldie, who is familiar with all the wrinklies and most of the crew...

But when they discover they share a passion for the same man, they determine to devise a culinary revenge...

When the widow of a much-respected Army Colonel discovers his past seems to include a secret child for whom he was paying maintenance, she is naturally very distressed