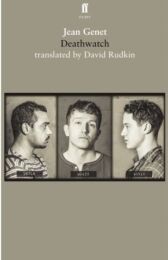 Short and intensely powerful, it provides an excellent introduction to his later dramatic work - The Maids, The Balcony and The Blacks

Locked into a world of dangerous rivalries, criminals Lefranc and Maurice compete for the attention of the charismatic condemned man, Green-Eyes

Informed by his own experience in French prisons, Deathwatch is an explosive exploration of the inversion of moral order

★★★★★... the intense claustrophobia and the torments that three confined people inflict on one another are horribly compelling" ~ Whats On Stage

"Expertly translated by David Rudkin ... set in a prison cell, it makes for a clammily powerful 75 minutes" ~ The Guardian