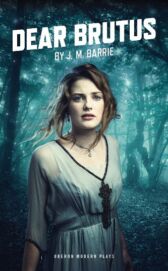 "The fault, dear Brutus, is not in our stars, but in ourselves"

Billed as "Peter Pan for Grown-ups", this is a haunting drama of self-revelation

One of the inhabitants a mysterious old man invites eight strangers to stay, all of whom have something in common

When one evening the wood miraculously appears, the guests feel compelled to enter this moonstruck terrain where they are given a second chance to negotiate better the twists of fate on which they have blamed the failure of their lives

Darkly comic with deliberate echoes of A Midsummer Night's Dream, Dear Brutus is Barrie at his most magical

And it can be performed Royalty Free!

★★★★ "A hundred years after its first premiere, the piece is still resonating with the crowd, asking tough questions while at the same time exciting curiosity in its spectators" ~ Broadway World