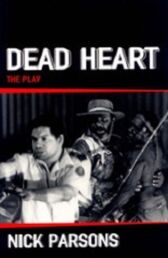 The schoolteacher's wife, Kate, has begun an affair with Tony, the good-looking but rebellious aboriginal teacher's aide

When it is discovered that he has made love to her on a sacred site, Tony is found dead in his bedroll the next day

The determination of Ray Lorkin, the local constable, to treat the execution as murder throws two laws into fatal conflict Dead Heart is adapted by the author from his prize winning stageplay

It has been screened at the international film festivals of Toronto, Hampton, Hamburg, London and Los Angeles