David Garrick and the Birth of Modern Theatre 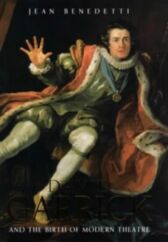 As his great friend Dr Johnson remarked, no actor before Garrick had made so much money or achieved such an eminent position in society

Garrick was the first international 'megastar'

Drawing on the large amount of source material that is available, from the account of Johnson's friendship with Garrick in Boswell's Life, through descriptions of his acting by English, French and German critics, to his own diaries and letters, Jean-Norman Benedetti has written a lively and fascinating account of Garrick's style and pivotal reforms, establishing his place in the development of acting and directing