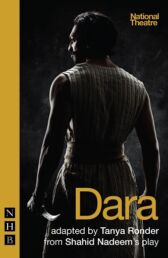 The imperial court is a place of opulence and excess - music, drugs, eunuchs and harems

But inspires puritanical rigour in his younger brother Aurangzeb

But Aurangzeb embodies a very different vision for India's future

And now they fight for succession

"Epic and often highly affecting ... addresses vital questions both about Islam's historic role and its place in the modern world...It's easy to imagine [this} will be studied in schools ... a magnificently ambitious project that throws both light and darkness on a crucial moment in world history" ~ Time Out

"A revelation, an epic play that uses mythic tales to speak to us today .﻿.. An intoxicating mix of family saga, history, politics and religion with enough drama and passion for any thriller" ~ British Theatre Guide

"Cuts to the thrust of the most critical, insoluble dilemma of our times; faith's absolutism against liberalism's tolerance ... Dara stands up for pluralism and there's real power in that ... An edifying evening" ~ Whatsonstage