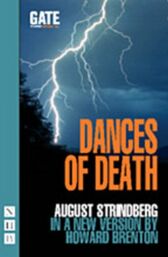 Unusually, both parts of the original play are both included, making this a rare version

Married for over thirty years, theirs is a relationship of explosive mutual loathing

Strindberg's tale paints a compulsive and bitterly funny portrait of a magnificently doomed couple, whose ongoing battle threatens not only their future, but that of their friends and children as well

A masterly, darkly hilarious depiction of the struggles and strains of marriage, Strindberg's classic The Dance of Death has been a staple of European theatre for over a century