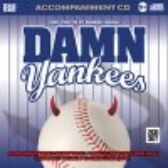 Winner of seven Tony Awards when it debuted on Broadway in 1956, Damn Yankees marked the second consecutive Best Musical win for the composers Richard Adler and Jerry Ross

The plot of Damn Yankees centers on a Faustian bargain made by a fan of the baseball team, the Washington Senators, for his team to beat the NY Yankees and win the World Series

Six Months Out of Every Year

A Little Brains, A Little Talent

Who's Got the Pain?

Those Were the Good Old Days