Curst Be He That Moves My Bones 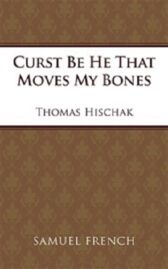 According to the 19th century literary critic Delia Bacon, just about everybody but the Bard of Avon!

Confined to an insane asylum because of her obsession with finding the true authorship of Shakespeare's works, Delia and her fellow inmates enact a series of madcap adventures in which Christopher Marlowe, the Earl of Oxford, Walter Raleigh, some Jesuit priests, a determined nun and even Queen Bess herself claim to be the true author

A merry farce rooted in historical facts and actual theories

Ideal for drama contests, assemblies, classrooms, or anywhere you can have fun with Shakespeare!