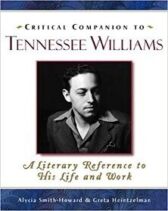 One of the greatest American dramatists of the 20th century, Tennessee Williams is known for his sensitive characterizations, poetic yet realistic writing, ironic humor, and depiction of harsh realities in human relationships

Williams drew on his own troubled early life to depict the loneliness, fear, and sexual anxiety of such memorable characters as Blanche DuBois and Stanley Kowalski

His work is frequently included in high school and college curricula, and his plays are still produced today

Critical Companion to Tennessee Williams includes entries on all of Tennessee Williams's major and most minor works, including A Streetcar Named Desire, Cat on a Hot Tin Roof, The Glass Menagerie, a novel, a collection of short stories, two poetry collections, and personal essays

It also relates to places and events in the context of his works, major figures in his life, his literary influences and issues in Williams scholarship and criticism

Appendixes include a complete list of Williams's works, a list of research libraries with significant Williams holdings and a bibliography of primary and secondary sources