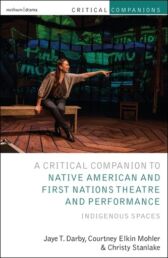 It is the first major survey book to introduce Native artists, plays, and theatres within their cultural, aesthetic, spiritual, and socio-political contexts

The book begins by introducing readers to historical and cultural contexts helpful for reading Native American and First Nations drama, followed by an overview of Indigenous plays and theatre artists from across the century

Finally, it points forward to the ways in which Native American and First Nations theatre artists are continuing to create works that advocate for human rights through transformative Native performance practices

Addressing the complexities of this dynamic field, this volume offers critical grounding in the historical development of Indigenous theatre in North America, while analysing key Native plays and performance traditions from the mainland United States and Canada

In surveying Native theatre from the late 19th century until today, the authors explore the cultural, aesthetic, and spiritual concerns, as well as the political and revitalization efforts of Indigenous peoples

This book frames the major themes of the genre and identifies how such themes are present in the dramaturgy, rehearsal practices, and performance histories of key Native scripts

Part One: Setting the Stage
1. The Circle of Indigenous Spaces
2. Incursions into Performance Cultures

8. Transforming Production Process
9. Being and Becoming
10. Expanding the Circle with Future Generations