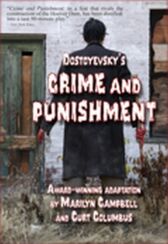 This new, award-winning adaptation of Dostoyevsky's literary masterpiece Crime and Punishment is told by three actors playing Raskolnikov (the murderer), Porfiry Petrovitch (the detective), Sonia (the young prostitute) and many other characters in this famous story

This "conversation on the nature of evil" is set in the mind of the murderer where he relives and explores, through the urging of Porfiry and Sonia, the thoughts, ideas and feelings that drove him to his horrible crime

Raskolnikov speaks directly to the audience at times, putting his case to them, so that the audience becomes another character in the telling

"Stunningly lean, taut and emotionally searing ... a work of theatre that never feels like a condensation of a seminal 500-page novel, but rather has the swift, sharp impact of a blow from an ax"~ Hedy Weiss, Chicago Sun-Times

"Only occasionally can the production of a classic make us see the work differently ... this adaptation and production remind us how thrilling a classic can be. On Opening night you feel the audience holding its breath throughout the performance. Go: it will leave you breathless, too" ~ AISLESAY Chicago