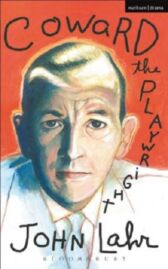 A re-issue in hardback of John Lahr's famous 1982 study of Noel Coward's plays ...

"Noel Coward," said Terence Rattigan, "is simply a phenomenon, and one that is unlikely to occur ever again in theatre history"

A phenomenon he certainly was, and it is part of John Lahr's purpose in this book to show how that phenomenon called "Noel Coward" was largely Coward's own careful creation

Lahr's penetrating critical study of Coward's drama investigates all the major and minor plays of "The Master" - Private Lives, Design for Living and Hay Fever make a fascinating group of "Comedies of Bad Manners"

Similarly, Blithe Spirit and Relative Values raise the "Ghost in the Fun Machine"

Lahr then goes on to explore the "politics of charm" oozing through The Vortex, Easy Virtue and Present Laughter