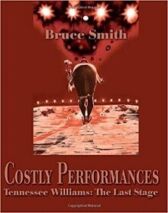 They became friends, and Smith helped Williams pull his crumbling life together - arranging readings, managing the publicity for Williams' last plays, holding parties at his home to introduce Williams to influential media people and coordinating materials and publicity for TV documentaries

Through the relationship Smith gained access to Williams' inner circle, providing the genesis for this book

Along with the trappings of Williams' eccentric life from 1979 to 1981 in Key West, Chicago and New York we are treated to Williams' musings on his fellow writers, show business and the actors who portrayed his introspective roles

Certainly the 1960s and 70s were a personal hell for Williams

For the 1980s, Williams envisioned a renaissance, both personal and professional

Unfortunately, most of the professional theatre world had come to regard Williams personally with contempt, and professionally as burned out

Set during this time of critical reviews Costly Performances is a saga of engaging, enlightened, terrified survival

Occasional serenity does surface at the end of the playwright's life, but a greater sense of bitterness and loss pervade

Costly Performances gives an insider's behind the scenes view of the sad, tormented, but strangely peaceful end of one of America's greatest writers