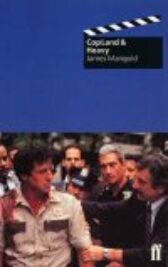 Two screenplays by an important American film-maker. Heavy charts the relationship between Victor, an overweight pizza chef, and Callie, a young waitress who comes to work in his mother's bar. Victor's obsession with Callie brings to a head the conflicts simmering under the surface of the lives of the characters who work in the bar

Copland has a similar overweight central character who suffers constant humiliation from those around him. He is the sheriff of a small town in New Jersey. The town is populated by cops who work in New York, but don't want to bring up their families in the jungle that new York has become

Like in High Noon, only one man can put an end to the lawlessness with which the cops are corrupting the town. With Copland, James Mangold shows that he can extend the private world of Heavy into a larger social context, balancing his sense of humanity for his characters with the violence inherent in contemporary society