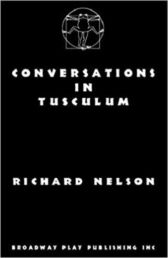 Or you can take action to save the democracy you love

Set outside of Rome in the villas and hillsides of Tusculum, the play chronicles those entangled in Julius Caesar's world of manipulation and power

"Mr Nelson has charted how the chaos of the world enters in the first place - slight by slight, betrayal by betrayal, injustice by injustice, conversation by conversation" ~ Eric Grode, The New York Sun

"Set in country villas outside of Rome in the months before Caesar's assassination, Conversations in Tusculum imagines the frustrations of fiery senators and warriors reduced to brooding in self-imposed isolation about the endangered civil freedoms of their republic ... A portrait of the guilt of being merely intellectual when the world demands something more" ~ Ben Brantley, The New York Times

"Conversations in Tusculum feels a little like Chekhov, and means to remind us of the power-hungry men currently in charge in Washington. Nelson's script, basically faithful to history, is written in a 21st-century vernacular that casts these men as Wall Street or Movie moguls on their days off. Conversations in Tusculum is a taste well worth acquiring" ~ Elizabeth Zimmer, Metro