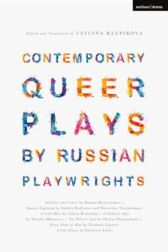 From a confession-style solo play to poetic satire on contemporary Russia; from a play for children to love dramas that have been staged for adult-only audiences in Moscow and other cities, this important anthology features work that was written around or after 2013-the year when the law on the prohibition of “propaganda of non-traditional sexual relations among minors” was passed by the Russian government

These plays are universal stories of humanity that spread a message of tolerance, acceptance, and love and make clear that a queer scenario does not necessarily have to end in a tragedy just because it was imagined and set in Russia

They show that breathing, growing old, falling in love, falling out of love, and falling in love again can be just as challenging and rewarding in Moscow and elsewhere in Russia as it can be in New York, Tokyo, Johannesburg, or Buenos

1. Foreword: A Journey to Russian Queer Drama by Tatiana Klepikova

4. A Little Hero (Malen'kii geroi) by Valery Pecheykin
In a witty and satirical manner, this play follows the psychotic break of a boy called Vovochka who grows from a local vigilante against homosexual neighbors into the founder and leader of “Crematorium”-an organization tasked with identifying homosexuals across the country that uses medication, torture, and murder as tools to “save” Russian children from “pedophiles”

5. A Child for Olya (Rebenok dlia Oli) by Natalya Milanteva
The relationship of two women runs into a problem zone when Olya, who wants to have a child but cannot give birth to one, starts pushing her girlfriend Zhenya to do that in her stead.

6. The Pillow's Soul (Dusha podushki) by Olzhas Zhanaydarov
A heartwarming story for children about an unlikely friendship that follows the protagonist from the discovery of his difference to acceptance by others and, finally, to acceptance by himself

7. Every Shade of Blue (Vse ottenki golubogo) by Vladimir Zaytsev
Examines the life of a boy who comes out to his parents in the hope of preventing their divorce. While the family mobilizes forces to “cure” him back to “normality,” he is left to deal with his coming out completely alone

8. A City Flower (Gorodskoi tsvetok) by Elizaveta Letter
In an intimate dialogue with the reader, a young woman called Erika, who is trapped in a male body, finds her true self after a journey of questioning, suffering, and regaining hope.