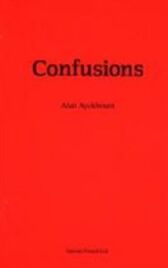 The plays are alternately naturalistic, stylised and farcical, but underlying each is the problem of loneliness

In The Drinking Companion an absentee husband attempts seduction without success

In Between Mouthfuls, a waiter oversees a fraught dinner encounter

A garden party gets out of hand in Gosforth's Fete, whilst A Talk in the Park is a revue style curtain call piece for the five actors

"Runs the gamut of comic technique from faintly pathetic situation comedy to outright farce.... Ayckbourn has demonstrated once again that even in a trivial situation he can hold the attention with his matchless ear for conversational speech, and in untrivial situations shows himself a comic writer of immortal quality" ~ London Financial Times