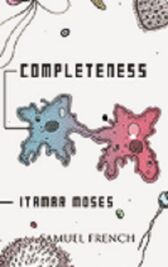 How does a computer scientist hook up with a molecular biologist?

He blinds her with science, of course

When Elliot builds a computer program to help Molly with her research project, the variables in their evolving relationship shift as rapidly as the terms of their experiment

"Moses has Aaron Sorkin's ear, and his gift for sorting Big Ideas into witty epigrams and human scale exchanges. A brash and brainy but ultimately honest and body-temperature portrait. It's about faith and data in an OK Cupid world" ~ New York Magazine