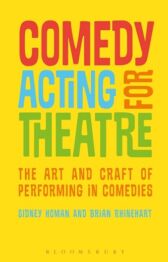 This book enables actors to create memorable and hilarious performances

And what we laugh at

And how performers can best elicit this response from their audience

Rooted in performance and performance criticism, authors Sidney Homan and Brian Rhinehart provide a detailed explanation of how comedy works and how to communicate comedy from the point of view of both performer and audience

Combining theory and performance, the authors analyse a variety of plays, both modern and classic

And in a special section, acting in Shakespeare's comedies is covered in depth

"If "dying is easy and comedy is hard", then Sidney Homan and Brian Rhinehart, accomplish a death-defying feat in bringing, with ease: the science, the practices and the dangers of being truly funny on stage" ~ Dexter Bullard, The Theatre School at DePaul University and Broadway Director