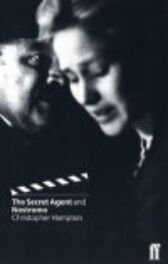 The Secret Agent: It is 1886, and Verloc, an agent provocateur who is secretly working for the police and the Russian Embassy while ostensibly a member of an anarchist group in Soho, is required by his masters to betray the anarchists in some spectacular way. The plan goes horribly wrong and the repercussions are dramatically different from those intended by Verloc. The Secret Agent was written and directed by Christopher Hampton

Nostromo: The attempt to rescue the silver of the San Tome mine from the hands of yet another revolutionary dictator tests the characters of the Goulds, inheritors of the Latin American mine, and of the indispensable and trustworthy Nostromo himself. In the swirling world of Costaguana, as in the London of The Secret Agent, the psychology of individuals in the most extreme circumstances reflects the fears and hopes of the time

David Lean was to direct the screenplay of Nostromo, but he died before production began. In his introduction, Christopher Hampton discusses working with Lean. This volume contains the revised screenplay which Hampton continued to work on with Hugh Hudson