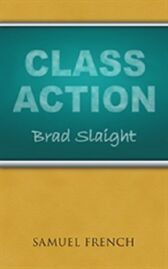 The many diverse scenes collectively make up the play and although each scene stands on its own, there is a common thread - all of the vignettes deal with situations that take place outside the classroom

The scenes cover a wide variety of contemporary subjects, both serious and light hearted, and audiences of any age can relate to the universal themes which include - prom night, home work, alcoholism, teen pregnancy, detention, teen idols, peer pressure and class elections

This is the first of a series of three