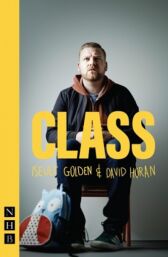 That's what his teacher says

Says he should see a psychologist

An explosive triple confrontation that is funny, heartbreaking and beautifully observed

An award-winning play about learning difficulties - in school, in life, wherever.

After a sold-out run in the Dublin Theatre Festival 2017, the play transferred to the Abbey Theatre, Dublin, in January 2018 before playing in the Traverse Theatre as part of the 2018 Edinburgh Festival Fringe