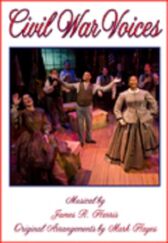 Large Mixed Cast
This musical tells the compelling and passionate true stories of real people who lived through the Civil War, often using the actual words they left behind in diaries, letters and other writings

Joe Harris, a cotton planter from Alabama with a conflicted conscience about the war - the discovery of his diary inspired this musical play

Elizabeth Keckley, who endured the indignity of slavery, bought her freedom and became Mary Todd Lincoln's closest friend and personal assistant in the White House

Theo Perry and his pregnant wife, Harriet - a young, married couple from Texas who were separated by the war

And Joshua Lawrence Chamberlain, a college professor from Maine who enlisted to fight for the Union, became a national war hero as a result of his actions at Gettysburg and accepted the Confederate surrender at Appomattox

The show contains exciting arrangements of some of the greatest songs of the period, such as "Battle Hymn of the Republic," "Amazing Grace" and "Sometimes I Feel Like a Motherless Child"

Appealing to all audiences, the songs and stories bring to life the incredible drama of this stirring era

Battle Hymn of the Republic