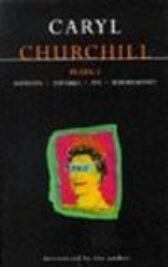 Serious Money is a satirical study of the effects of the Big Bang - "Pure genius...the first play about the city to capture the authentic atmosphere of the place" ~ Daily Telegraph

"A dramatist who must surely be rated among the half-dozen best now writing...a playwright of genuine audacity and assurance, able to use her considerable wit and intelligence in ways at once unusual, resonant and dramatically riveting" ~ Benedict Nightingale, New Statesman