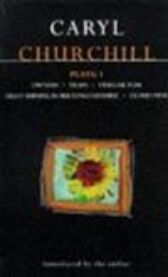 In Traps, a set of characters meet themselves and their pasts to create "plenty of sinewy lines and joyous juxtapostions" - Plays and Players

Vinegar Tom "is set in the world of seventeenth-century witchcraft, but it speaks, through its striking images and its plethora of ironic contradictions, of and to this century..." - Tribune

Light Shining in Buckinghamshire, is set during the Civil War and "unflinchingly shows the intolerance that was the obverse side of the demand for common justice. Deftly, it sketches in the kind of social conditions.. that led to hunger for revolution...The play has an austere eloquence that precisely matches its subject" - The Guardian

Cloud Nine sheds light on some of the British Empire's repressed dark side and is "a marvelous play - sometimes scurrilous, always observed with wicked accuracy, and ultimately, surprisingly, rather moving. It plunges straight to the heart of the endless convolutions of sexual mores...and does so with acrobatic wit" - Guardian

Owners - "I was in an old woman's flat when a young man offering her money to move came round, that was one of the starting points of the play" - Caryl Churchill

"A dramatist who must surely be rated among the half-dozen best now writing...a playwright of genuine audacity and assurance, able to use her considerable wit and intelligence in ways at once unusual, resonant and dramatically riveting" - Benedict Nightingale, New Statesman